Mina2 Stars are as rare as hens’ teeth. They are the cruising world’s equivalent of a combination of a Victoria Cross (for valour) and an Olympic Gold Medal (for sporting excellence). They are without doubt the most coveted of honours.

Those who have been awarded this accolade are:

The Downstairs Skipper. 2010. For almost unfailing support of the Upstairs Skipper’s self-indulgent passion for high latitude adventures, whilst seeing her future financial security and her childrens’ inheritance squandered in that pursuit.

The DS hoists her national flag when entering Argentina

Ally Ford. 2012. For her unstinting logistical support back at Oyster Aftersales, rendering advice and assistance 24/7, identifying and sourcing the many parts that have broken on Mina2, and having them couriered to the four corners of the earth. Ally has been a key member of the Mina2 team for many years and, without her, the Mina2 Adventure would have ground to a halt somewhere in the Mediterranean.

Neil Thackray. 2010. Displaying hopeless romanticism (difficult for a Geordie), Neil used his precious 10-minute allocation on the satphone when crossing the Equator to phone his then girlfriend Sarah Willan and proposing marriage to her. Further, after crossing the Atlantic and arriving in Brasil, Neil stood in at short notice as Acting Temporary Upstairs Skipper when Tim had to fly back to the UK. Not only did he not wreck the boat, but he was voted by the crew “The Best Mina2 Skipper Ever”. Neil is the only person ever to have been awarded the Mina2 Platinum Star. 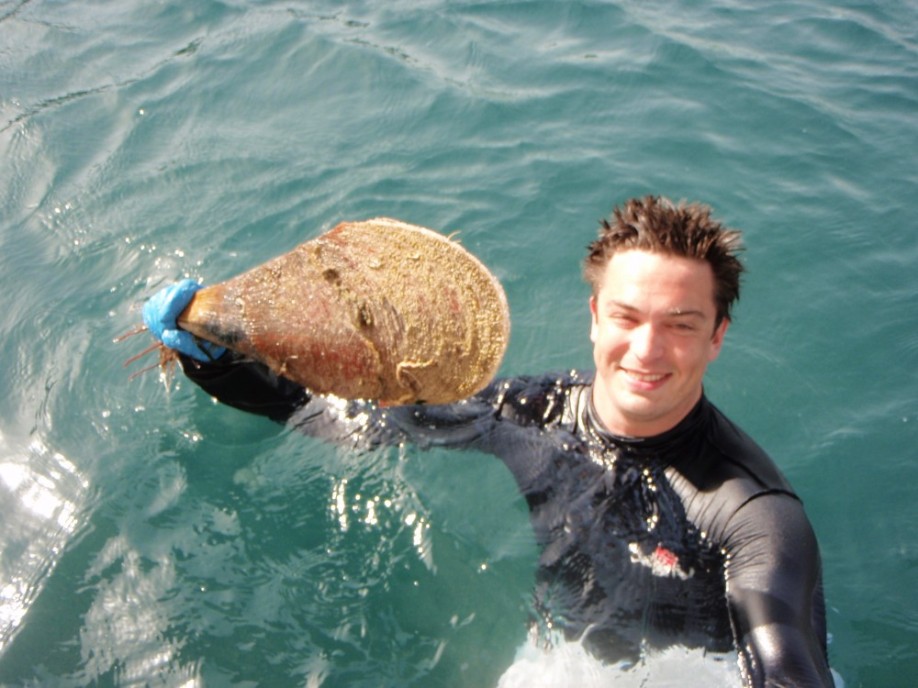 “Anyone for moules mariniere?”   Neil brings his lunch up – and not for the last time

(Neil and Sarah, with the recent addition to the family of little Ollie, continue to live happily ever after).

Venetia Kenney-Herbert. 2010 and bar in 2012. It must be difficult being a woman in a man’s world, but Venetia is no ordinary woman. Once inadvisably described as formidable, she has been a key member of Mina2’s crew on all our most challenging passages – across the Norwegian Sea to the Lofoten Islands, the Biscay Crossing, Sardinia to Croatia, the Transatlantic and, most recently across Drake’s Passage to Antarctica. Nothing fazes her. Venetia (almost) provides the necessary calming and civilising influence on an otherwise rough and uncivilised male crew, but she is best known for being the inventor of arguably the best and undoubtedly the most potent cocktail in the world, the Mango-Bomb-With-A-Triple-Gin-Float.

Venetia, a formidable and wonderful inventor of cocktails

Peter Barker. 2010 and bar in 2012. Generously named by his fellow crew members as The Golden Boy, Peter had no experience of long offshore passages before joining the crew for the Transatlantic crossing, during which he excelled in every area, earning the total admiration and respect of the Skipper.  But for Peter, this was not enough. He found the Transatlantic “an adventure but not a challenge” and immediately signed up for the much more perilous Antarctic Expedition, much to the dismay of his mother. During the Antarctic trip Peter was a member of the Rapid Response A-Team. When he wasn’t risking his life to save the lives of others, he was behind the camera making the highly acclaimed and soon-to-be award winning video of our adventure. Peter is the son of the Skippers.

Colin Andrews. 2009. The Charles Darwin of our cruise down the coast of West Africa, Colin identified 80 different species of bird and caught literally hundreds of fish. Not a natural sailor, he then endured a very fast and rough passage to the Cape Verde Islands during which Mina2 smashed the 200-mile day barrier.

Linda and John Andrews. 2011. Linda and John, themselves owners of the ocean-crossing Oyster 47 Suilven, joined Mina2 for the 1200 mile 8-day passage from Buenos Aires to the Falkland Islands; the Falklands cruise and thence to Staten Island and finally Ushuaia in the Beagle Channel. On passage to the Falklands, they endured a hurricane force storm for 36 hours during which time the wind speed never dropped below 45 knots, and for much of the time was well in excess of 60 knots. Linda is the Skipper’s sister. 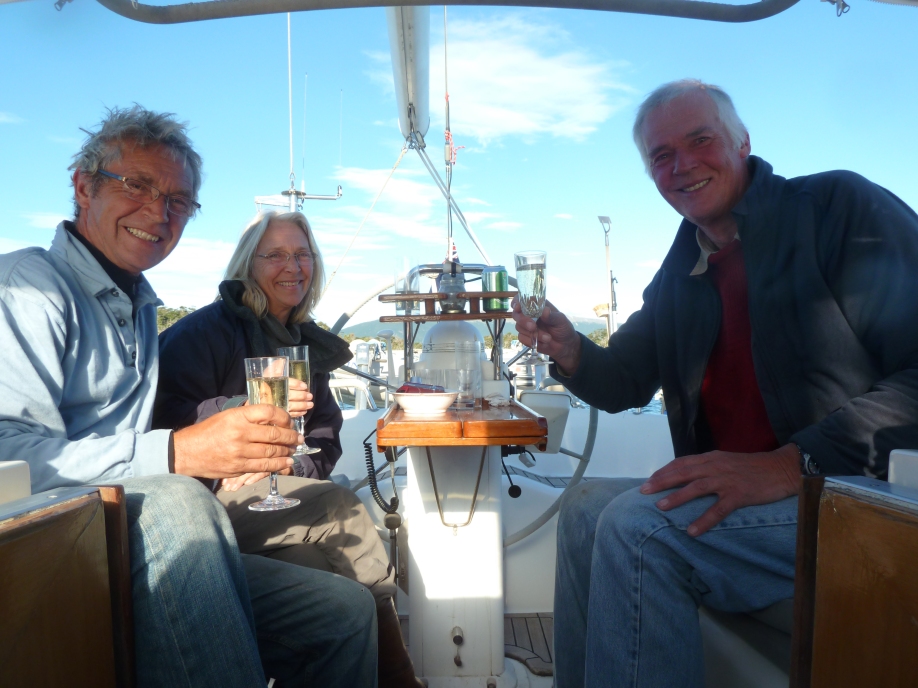 Ewan Edwards. 2012. An Antarctic scientist having spent two years carrying out research on Bird Island in South Georgia, Ewan joined Mina2 for our Antarctic Expedition. An experienced ocean sailor, he was an immensely valuable member of the crew, and his intimate knowledge of the wildlife during the crossings of the Drake Passage and on the peninsula enhanced our experience immeasurably. He speaks Penguin, Whale, Seal and Scottish. When Ewan wasn’t chatting to the animals (crew included) he was, like Peter, a member of the Rapid Response A-Team, battling with threatening icebergs on a daily basis. 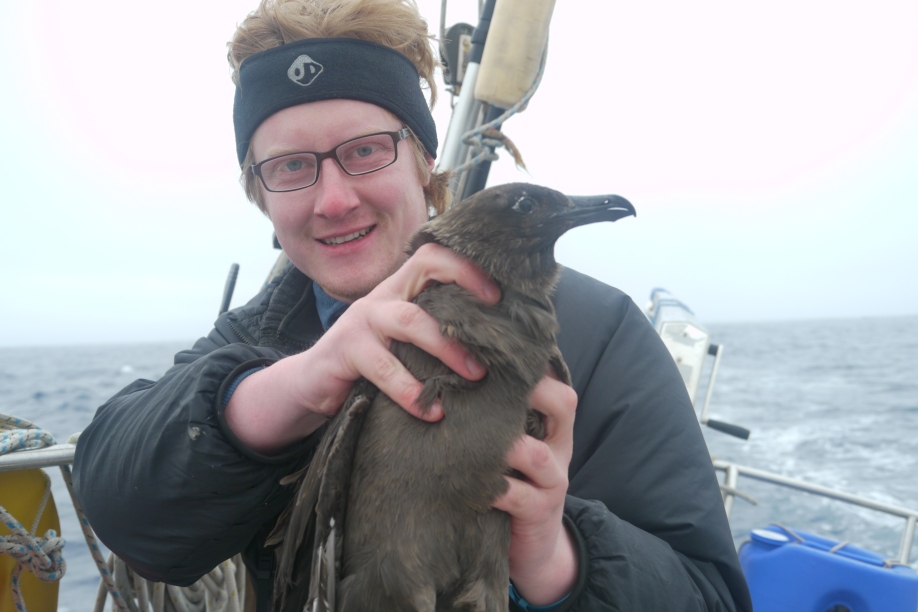 Ewan, the Dr Doolittle of Antarctica, has a quiet word with a Dolly-eating Skua

Richard Close-Smith. 2012. Richard and the Upstairs Skipper have been sailing together on and off for 40 years. He has been a stalwart member of Mina2’s crew on some of our toughest passages, starting with the crossing of the Norwegian Sea from Shetland to the Lofoten Islands in 2004 and most recently on our Antarctic Expedition during which we battled with 50+ knot winds. Richard was educated at Eton, but no one’s perfect, and it probably accounts for his taste in exotic underwear.

Richard has a penchant for exotic underwear

Tom Mallaburn. Tom is Mina2’s medical man (retired dentist) and has sailed on Mina2 on numerous occasions including many long passages. His Gold Star was awarded for his 3,000 mile passages from Tierra Del Fuego at the tip of South America to Angra Dos Reis in Brazil during which we hitched a lift on a cold front and surfed up the South Atlantic ahead of 50+ knot winds. Tom is probably the tidiest man ever to sail on Mina2. 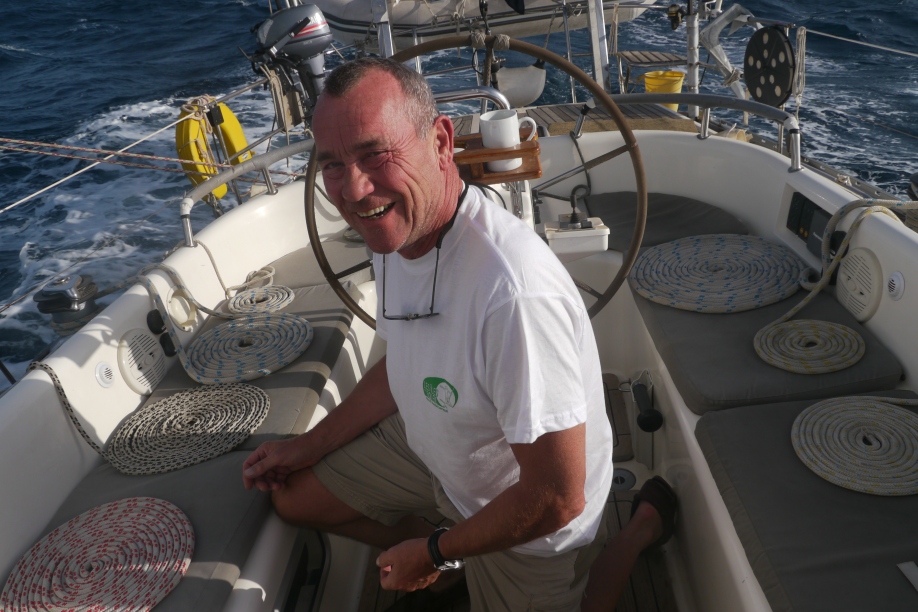 Watch and learn. Tom, the tidiest man on Mina2

Lawrence Wells. Lawrence has put more miles under the keel of Mina2 with the Upstairs Skipper than any other person, his preference being for long offshore passages. Lawrence crewed on Mina2 for the entire length of the eastern seaboard of South America, from Tierra Del Fuego in the south to French Guiana in the north, a distance of about 6,000 miles. An enthusiastic fisherman, he has caught some of the most memorable meals we’ve had. 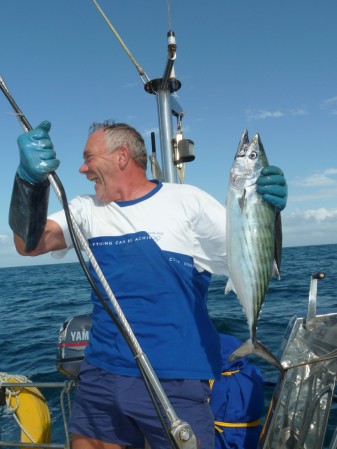 Lawrence brings in the lunch – again